The Cultural Charms of Sarasota.

Sarasota has more than soft white sand beaches and turquoise green ocean to entice people, it has a vibrant arts and cultural scene, where live theater, concerts, ballet, opera, galleries, and museums stimulate the mind. The allure of relaxing on the beach is complimented by quality art and cultural offerings that few other communities of its size can offer. Sarasota and Manatee counties together are pumping almost $350 million into the local economy every single year. Not only that, but the arts and culture scene is creating thousands of full-time jobs and drawing millions of visitors to the area. Arts One of the most famous magnates, John Ringling of Ringling Bros. and Barnum and Bailey Circusbegan wintering in Sarasota in 1912 and later he moved the circus’ winter headquarters here. Ringling and his wife, Mable, traveled Europe and built a collection of art by old masters such as Rubens, van Dyck, and Velazquez and constructed a Renaissance-style 21-gallery museum to house their treasured collection of paintings and art objects. The Museum is open daily 10am-5pm, Thursdays until 8 PM and closed Thanksgiving, Christmas, & New Year’s Day.

Numerous publications have noticed it too. American Style Magazine named Sarasota as the No. 1 “Small City for Art in the United States” while NerdWallet has listed Sarasota in the “Best Small Cities for Art Lovers“. Meanwhile, Sarasota’s iconic Van Wezel Performing Arts Hall has been recognized as the No. 1 “Performing Arts Hall in North America” in the 2,000-seat category by Venues Today five times. And Movoto has named Sarasota among “The Best Cities in Florida for the Arts“.

Whilst the Ringling may stand as the hallmark in the community in the view of many visitors, where you can wander through the galleries filled with treasures: old masters, contemporary art and exhibitions from around the world. Beyond The Ringling, there are dozens of centers for visual art along the Gulf Coast. Galleries extend through out downtown Sarasota, while Coastal Living Magazine has named the community of Towles Court among the Top 10 Artists Colonies in North America.
Art walks and festivals are weekly occurrences, whether partaking in first Friday gallery walks on Palm Avenue or Music on Main in Lakewood Ranch, and third Friday art walks in Towles Court. You can view even more with this list of recurring events in Sarasota. What’s more, organizations like Art Center Sarasota and Longboat Key Center for the Arts provide education, exhibitions, and cultural programs to the local community. 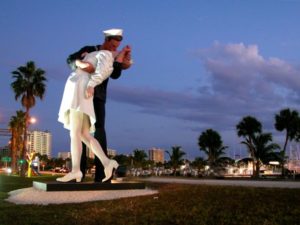 The Sarasota Museum of Art (SMOA), as Sarasota’s first museum of modern and contemporary art, a division of Ringling College of Art and Design, will serve as a catalyst for appreciation and understanding of globally significant contemporary art by artists both established and emerging. A platform for education and exposure, the Museum will be a haven of the avant-garde for audiences of all levels of experience with contemporary art. Having no permanent collection, the Museum will be flexible and timely through an evolution of transformative, relevant, and pioneering new exhibitions and programs. At its core a learning institution, the Sarasota Museum of Art will host community education programs and courses to immerse audiences in the power of contemporaryart.
Speech Patterns music video shoot by local filmmaker, Joey Durango.
The annual Sarasota Film Festival was just called one of the Top 25 Coolest Film Festivals in the World by Movie Maker Magazineand local creative entrepreneurs develop numerous independent films as well as web series, short films, documentaries and other content..

Throughout the Sarasota-Manatee county region, you’ll discover architecture that celebrates our history, climate, and way of life from the Venetian and Mediterranean-style influence of John Ringling, to the mid-century modern movement indigenous to our region known as the Sarasota School of Architecture. From the 1940’s-60’s, notable practitioners such as Paul Rudolph, Gene Leedy, Ralph Twitchell, and Victor Lundy among others, pioneered an innovative regional style that is still studied and revered by architectures students the world over. The annual SarasotaMOD Weekend organized by the Sarasota Architectural Foundation celebrates this legacy. Today, contemporary architects continue to push the boundaries of the medium in what has been referred to as a new golden age of architectural innovation.

The community is committed to maintaining a hub for creativity and culture. One of the most exciting initiatives dedicated to continuing our place as Florida’s premier destination for arts and culture is known as Sarasota Bayfront 20:20. Community and civic leaders have begun to collectively articulate a long-term master plan for re-investing in 42 acres of land along the Bayfront near the Van Wezel Performing Arts Hall. The goal is to make this project a permanent expression of Sarasota’s cultural prowess while inhabiting one of the city’s most beautiful and accessible waterfront settings.

We Are Life Changers.